Since so many of you have asked, here's a short and sweet version of the proposal story.

Friday was a lonnnnng day. A great day, but a long day. I got up bright and early to get a bit of work in before heading off to a Blogger event at the Texas Beef Council (more on that tomorrow). I spent the majority of the morning and afternoon there, where we did a bit of cooking, a bit of listening, and a whole lotta eating, and then headed to work. I normally only work a handful of hours on Fridays, but I had offered to stay late that night for some extra money, so I was looking at being at work for 9+ hours, with a teeny break to see Ava and David for dinner and so I could nurse, putting me out of the house for an exhausting 15 hours.

That's where this story starts.

I got home just before midnight, after a drive home that left me muttering to myself, Just stay awake. Just stay awake. I had long since told David to go to sleep and not bother waiting up for me, so imagine my surprise when I opened the door to find the most beautiful sprinkling of roses and candles on the staircase.

At this point, I obviously was tuned in to something going on, but I honestly could not believe that he would actually propose!!! Then, I got to the top of the stairs, where there were more rose petals, candles everywhere, two gorgeous bouquets of roses, hydrangeas, daisies and baby's breath, and - to really spoil me - five of my favorite desserts from places around Austin, including my absolute fave: Romeo's Tiramisu. The room was absolutely glowing with candlelight and smelled so beautifully of roses, and there, in a suit and tie to my 15 hour old dress and tights (thank God I bothered making somewhat of an effort!!!!!), was David.

He approached me, saying the most beautiful things about how he wanted to spend his life with me, wake up and fall asleep with me, grow old with me, and how much he loved me even more than he ever could have thought as he saw me with Ava, and then he got down on one knee and proposed.

I held it together surprisingly well considering as I told him that yes, of course I would marry him, but inside I was a mess. I never in a million years would have thought he would be able to surprise me with a proposal, as I'd been on the lookout and so incredibly hopeful, but after our friends got engaged two weeks ago, I had really felt hurt and discouraged, accepting that this may not happen for us. Little did I know that David also had felt hurt and discouraged by their engagement, as he had originally planned to ask me two weeks before when I had to work late but got sick, and then, switched it to Easter, before we got the call came that our two friends had gotten engaged that day!!!!

I am so insanely, incredibly, over-the-moon happy. No date has been set yet, but once David gets through his final Thursday we'll start talking about it in more detail, and of course, if you thought I was detailed and crazy about my pregnancy...just you wait, friends. 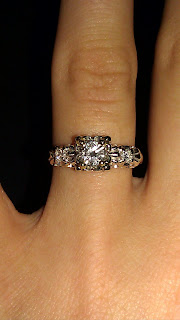 It pains me physically to have had to hand in over on Sunday to be sized, as it was taken down to a 5, but my child-sized hands were still too small for it, so it's out for two weeks getting taken down to a 4.5 :( Super sad face, but a small price to pay, eh?

First order of wedding-planning business: My dress. Can't wait to keep you guys informed of how the hunt is going!!!!!!!!

I'm so, so happy. Thank you so much to everyone that offered me words of advice, support, love and wisdom during the journey that took us from August 2007 to where we currently are. And, though unconventional to have a family before the wedding, I'm so happy to be able to include Ava in the ceremony, and to have her get to be present.

I'm the luckiest, most blessed person I know :D
Posted by B at 6:56 AM