Here's the deal. I vow not to go all bridezilla on anyone, but even still, wedding planning is stressful. Particularly when we're paying for the entire wedding, reception and all the fixins entirely on our own. Whomp whomp.

Nonetheless, it's not all bad. In fact, aside from the financial woes implicit with wedding planning, I'm actually finding it quite fun and exciting. Here's where we stand:

My dress: I found it!!!!!! Saturday, my best friend Basil and I headed out to the extremely accomodating Balina Bridal and, ten gowns later, I knew I had found my dress. I would love to post a picture here, but out of sheer concern that David would see it somehow, I'm going to refrain :( I'd love some opinions, though, if anyone wants me to email them a picture? I'll give you this much - it's strapless, and it's fancy :) I've always loved me some lengthy train, and I took that into consideration when I was shopping. It also won't come back until September because it had to be ordered in my size, but I hear that's the norm!

Wedding party: It's a bit comical that I've found my dress, and yet we have decided zilch for certain regarding the wedding. We're oscillating between two very opposite ends of the spectrum: to head for the islands/the keys/somewhere beachside and romantic just the three of us to tie the knot, or to have a wedding with our friends and family here in Austin/surrounding areas. The latter would be ideal, but weddings are COSTLY. Holy cow! Anyhow, until we decide on a locale/wedding style, we can't really name many attendants, since we don't know if/how many we'll have. But, in the case that we have a ceremony in Austin, I knew that I wanted my "honor attendant" to be the very same friend who went dress shopping with me, and so I asked him to be my Man of Honor over post-wedding dress shopping celebratory drinks. He said yes :)

The only other attendant(s) we have set is my flower girl, which will obviously be Ava. Duh. AND...she has a gown! 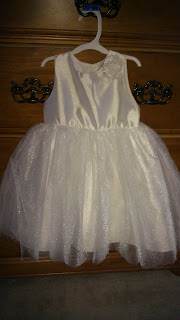 The best part? It was a steal! Like, seriously cheap! I've paid twice that for outfits! WOOHOO!

As for the other flower girls, I'm seriously considering asking the two girls I nanny for. While that seems obvious, here's why it is something I have to debate. I have three sisters. Three LITTLE sisters. Like, next summer (we're shooting for the date to fall within July or August), they'll be 12, 11 and 8.5. And I fear that their feelings will be hurt if I ask S & P. BUT....they're a bit old for flower girls, right? And, not only is it an additional expense on my family (who'll already be traveling from California, including their own five plane tickets and a hotel...$$$), but they're also only going to be here for a handful of days, aka making fittings/rehearsals/etc a total pain. And, sad as it is, Ava would follow S & P anywhere, which is the entire point of having additional flower girls. My sisters (her aunts), she's met once :(

So, my question is: