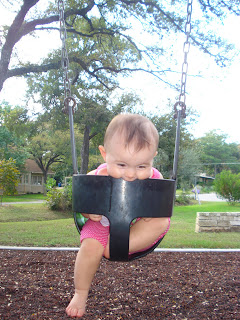 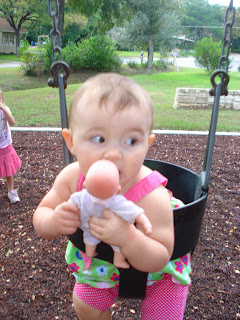 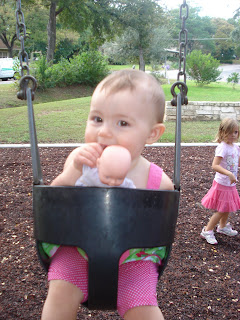 I know I say it every month, but time is flying. Seriously, can someone commission researchers to check and see if time seriously accelerates while moving forward? Because even my childless friends say this is the fastest year to date. I mean, it's November on Monday, my friends! How in the world?!

This has been a great month around here, unless sleep deprivation is causing me to remember it wrong. Yep, that's right. Still having sleep issues. Woe is me. Seeing as how I'm still dedicated to breastfeeding to at least a year, and I feel like weaning, the transition to her crib and therefore sleeping through the night will most likely go hand in hand, I'm just dealing with being tired for now. Thankfully I don't have to wake up at some ungodly hour and head off to work before the sun comes up, so it's workable. But man, oh man, I would really just like a solid six hours straight of sleep. Why is that too much to ask? Anyhow, moving on.

*She can take one step and maintain her balance, but that second step throws her every time. She took her first step on 9/24, and has done it about ten times since? It's definitely getting more frequent, though, and she'll be full on walking before we recap this next month, I'm sure. EEK!
UPDATE: As of 10/28 at 7:30PM, Ava took two full steps together!!! AHHH!!! Having a hell of a time getting video, but working on it :)

*Ava is a fantastic eater. She'll eat anything you give her, which for us is what we're having at that particular meal. Faves include pulled pork, turkey bacon, waffles, all beans, strawberries, grapes, cantaloupe, pineapple and mandarin oranges. She seriously can eat a full cup of mandarin oranges - they're her faves!

*Ava is saying "mama" all day long this week, and this mama loves it! Also in her repertoire: "hi", "dada", and "baba", all of which she seems to understand the meaning of. The other day she tossed her babydoll, which has quickly become her favorite thing, over the baby gate and then yelled "babababababa" at the top of her little baby lungs until I picked it up, alerting me to this very upsetting situation :P LOVE IT!

*Ava loves loves LOVES to swing. We try to make it to the park every other day, if not every day, because she loves it so much!

*Ava claps and waves and high fives - too cute! Now if only she could throw the hook 'em (intentionally)....

*Ava has gone from pulling up on things to standing on her own. She can even squat down and stand back up with no assistance!

*The cutest thing ever: Ava dances! She can't take steps consistently, so half the time when she manages to stand, she shakes her booty. I attribute this to my non-stop Madonna singing/dance parties :)

*She still weighs 20 1/2 pounds. That's right. Despite all this eating, she gained 0 lbs this month. That's normal, though, seeing as how her growth is starting to level off, and it's not like she's not a healthy size :P

*It's impossible to get the squirmy wormy's height, but I'm working on it, friends!