Don't Kill the Birthday Girl: Tales from an Allergic Life 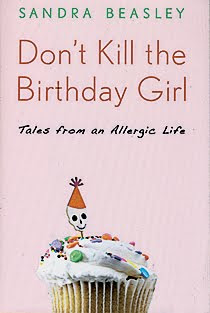 I just recently read a book by Sandra Beasley, a woman who has grown up allergic to dairy, soy, wheat, shellfish, tree nuts, many citrus fruits and more, entitled, "Don't Kill the Birthday Girl: Tales from an Allergic Life". Initially, I was interested because, while I consider myself empathetic, I wanted to see what it would be like to grow up with those types of allergies. The ways in which she experienced the world - and everyday situations that we take for granted, like birthday parties - was something I was curious about; after all, Ava has been touched by a similar (though much less severe) fate, and doesn't seem to be outgrowing it. I dove into the 250-page novel, part memoir, part historical and scientific history of food allergies, wanting to know what we were up against. Could Ava live a normal life in spite of being unable to eat dairy? (I should mention that her previous experience with eating a slice of pizza was a fluke, at least as far as later experiences have gone. We're back to square one as far as her ability to consume milk and other milk products, including butter, cheese, yogurt, etc). Moreover, I was curious as to some of the alternatives out there: what advice could this woman offer a mother searching for ways to ensure that her allergic child would not end up feeling left out and isolated from her peers?

What resulted was half what I was hoping for, and half unexpected. I read the book in its entirety in one day, and am definitely the better for having checked it out from the library. While my initial thought was that I would recommend it to my friends who also have children with food allergies, I felt upon completion like it should be required reading for the general population. I cannot count on one hand how frequently I run into misinformation about food allergies, with dairy being amongst one of the most often misunderstood. I've seen people hand her cheese ("If the milk is heated, it shouldn't bother her!" ???), ask if she could have butter instead of cheese on her pasta (apparently our country is in serious need of a review of the food pyramid....), and, with the best of intentions, offer up pesto in place of both (there is parmesan in pesto). While I don't expect everyone I spend time with to be experts on the subject, I do feel as though it wouldn't hurt anyone to know what consitutes dairy when around a child with a milk allergy on a regular basis. As a nanny, I always ask parents if their child has any food allergies, as well as their playdates, friends at birthday parties, etc. It's just common courtesy in my opinion, especially in this highly allergic world.

I'll get off my high horse now, but if you have a spare afternoon, the book is a great read, and eye-opening to those living with someone with food allergies!
Posted by B at 8:20 AM