Things NOT to Do in Austin With Your Two-Year-Old: Blanton Museum of Art

Ava? She's basically a trooper. I've been lugging her around nearly nonstop since she was weeks old, one adventure after another, and as such - she's an adaptable, easy-going, lovely child. Except when she isn't.

I was treated to one of those few instances when she wasn't easy-peasy this past Thursday, when I loaded up the three girls to head over to the University of Texas's Blanton Museum of Art. Austin has just about everything you could ever want, but until about six or so years ago, we lacked a world-class art museum. Now, though, we have one, and how years have passed without me visiting and/or bringing Ava is beyond me! Anyhow, when we heard that every Thursday the museum was open to the public at no cost, we just knew that it was our time to visit! This was much better in theory than it turned out to be in practice.

A while back, I mentioned that Ava had given up her nap. While she's since taken it back up occasionally, she is still mainly past her nap days, despite still being in desperate need of one come lunchtime. So why it sounded good to me to take the girls AFTER lunch, I'll never remember, but that's precisely what I did. 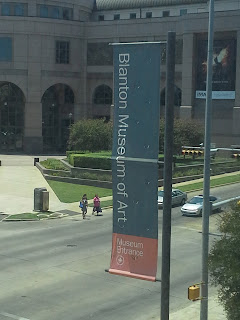 It started out well enough, with Ava being excited to be in a new, stimulating place. We decided to start our tour upstairs, and headed up to where there were Classic, Renaissance and Western exhibits, as well as the Modern Art that I really enjoyed. Unfortunately, however, Ava also showed particular interest in the modern section, so much so that she attempted to touch each sculpture/installation and any art that she could. She wasn't the only small child there - far from it, in fact - but the docents at the Blanton were particularly serious about their job, and took each opportunity to gently remind Ava to instead scold her firmly and, in my opinion, inappropriately. This started a rapid spiral downhill that resulted in me carrying her over my shoulder, kicking and screaming and crying hysterically (thank you, acoustics, for making it so much worse!), to the elevator, where she then proceeded to throw the biggest fit I've ever seen her throw in my entire life. I had half a mind to hit the stop button and ride out the storm isolated from the general public. At one point, she was screaming hysterically through her tears, "Let me out of here!!!" while rolling around on the floor. If I wasn't sweating profusely due to the exertion required to calm and contain her, I may have laughed. I assure you, however, I was not laughing, particularly when those elevator doors opened and the general population of the first floor - which seemed to be around the age of 60 - stared with their mouths wide open at my obvious display of poor parenting. It was a nightmare.

Somehow, and I'm honestly still not sure how, I was able to calm her down to the point of being able to reemerge back up to the second floor and continue our tour of the museum. She even managed to participate in the "Human Touch" kids activity, where you get a bag of objects and have to find them in the pieces in an exhibit, and we managed to find all three of hers! All in all, it wasn't the most miserable experience we've ever had, but I do think that in order to enjoy the museum, I'll likely go alone - or at least in adult company - next time!

Here are some of my favorite pieces before the meltdown: 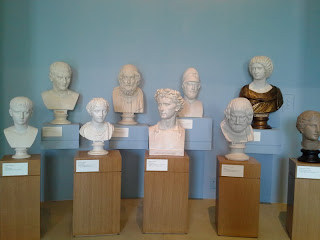 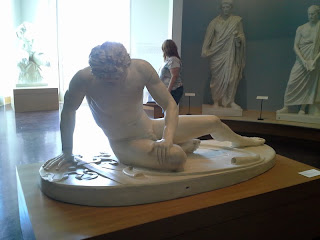 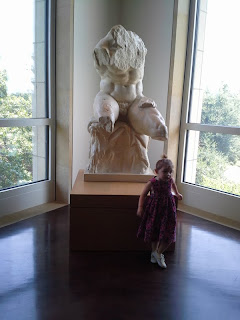 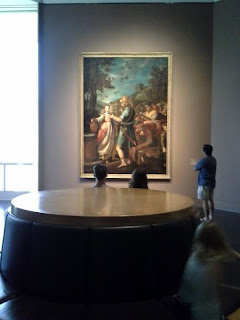 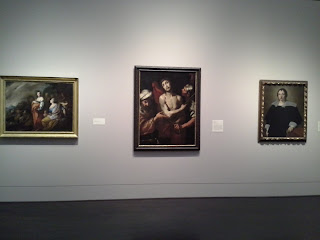 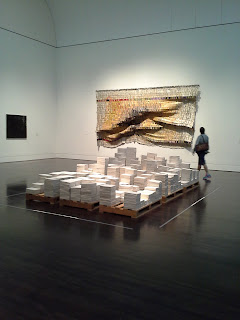 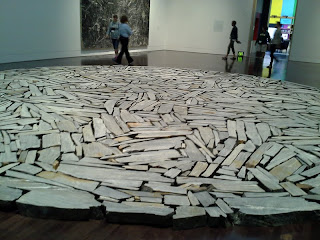 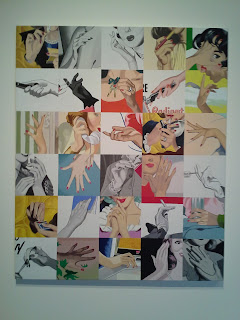 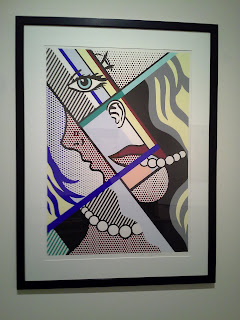 They had a room full of pennies - something like 60,000 (!!!!) - that they told us the kids would love. Too bad they freaked out if your shoe accidentally touched one or your kiddo lifted one off the ground, despite them being "touchable". This is where things took a downhill turn! 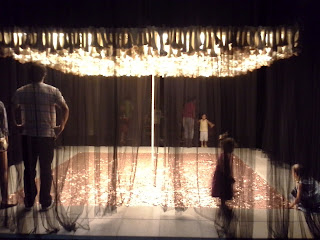 Then, since I'm a glutton for punishment, we left the Blanton and headed across campus to the Harry Ransom Center to see the Gutenberg Bible on display there, since I hadn't yet learned my lesson. Thankfully, though, the rest of the Ransom Center was closed, and we could only see the Bible quickly before heading back to the car. Whew! 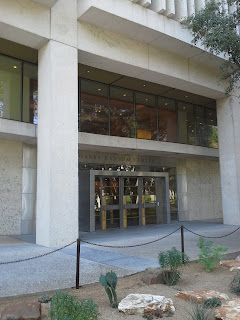 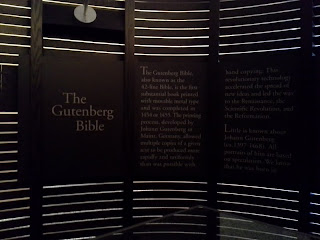 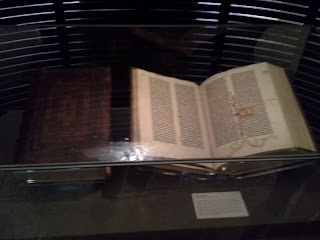