Things to Do in Austin: A Ride on the Metro Rail!

You know how to make your child think that you're basically the coolest parent ever while spending just $2.00 and an hour of your time? You can ride the Capitol Metro Metro Rail!

The Metro Rail, for those who aren't Austinites, is a newly built commuter train that makes several (well, seven, to be exact) stops between Leander (a suburb about 45 minutes from downtown) and downtown Austin. If you board going Southbound anywhere after the Howard Station (Kramer or below), the fare to ride all the way downtown is a mere $1.00, with the ride back the same. And, best of all, children under five ride free with an accompanying adult! $2.00 round trip downtown and back? Definitely beats the gas for an SUV!

Gas expenses aside, though, the Metro Rail is seriously fun to ride. I have a serious case of le motion sickness (I mean, so bad I can't even swing on children's swings without feeling woozy!), so I had some reservations about the train, but it was a smooth ride that never once left me feeling queazy. Win!

Best of all, Ava LOVED it! We boarded that day at the Kramer Station, despite an almost complete lack of parking (it's not one of the park and ride locations). We were taking it downtown to take S back to her mom - and mainly for the experience - so it was a quick trip there and back! 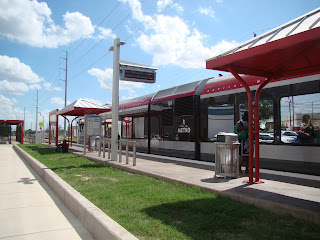 Since the trains were just built and introduced within the past 18 months or so, they're swanky :) 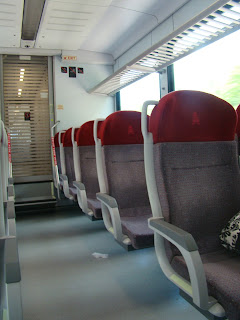 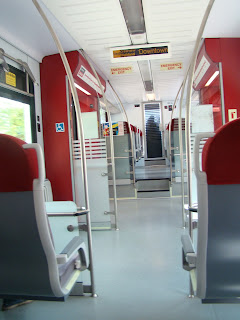 My little pumpkin, enjoying every second: 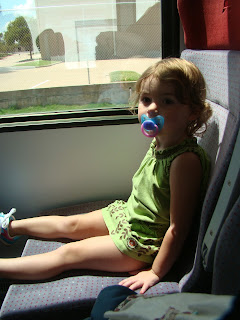 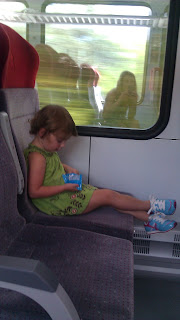 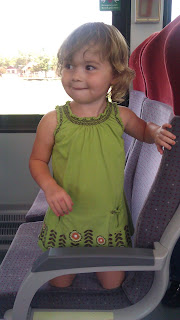 It took only twenty-five minutes to get from the Kramer Station downtown to the station at 4th and Trinity - longer than it would take to drive, but only due to the scenic route. The train itself moves quickly and efficiently, with little discomfort around the turns and corners. Also? It was virtually empty! We were three of the four people aboard (!), though this may have been in part to the mid-day Wednesday ride. Either way, it was lovely to not be all cramped together, and on the rush hour train we took back, it was still pretty empty (with about ten people aboard aside from ourselves).

In short, this was a great way to spend some time on a hot afternoon (it's air conditioned - woohoo!), and will be an invaluable resource when we want to take a trip downtown without having to think of gas and parking expenses! I can't wait to ride again!