Things to Do in Austin: Red Bud Isle.

Now that I've plowed through the majority of my Austin bucket list and the temperatures are starting to drop (well, at least out of the triple digits!), I've started tackling my list of the more obscure things to do in Austin.

We started last week at a dog park/island right off of Red Bud Trail between Lake Austin Blvd. and Westlake Dr. called Red Bud Isle. Though it's less of a park than I had thought in my head, it's a perfect space for a.) getting close to Lake Austin for free (!!), and b.) for dog lovers and dog owners alike to exercise and spend some time with their favorite four-legged friend.

Seeing as how we didn't have a dog with us, I thought I would instead let Ava explore the banks of the lake. We weren't alone - there was a family there playing fetch with their dogs, wading in the water (which gets about waist high, FYI), and picnicking - a pretty adorable family outing if you ask me!

As for Ava, well, you saw what she occupied herself doing: taking it all in.

Here are a few more shots of the gorgeous scenery of Lake Austin at Red Bud Isle: 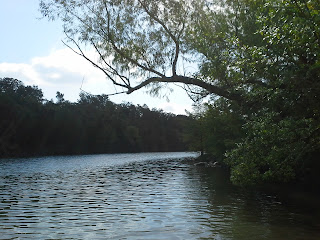 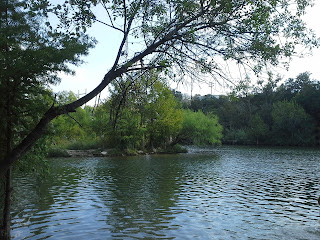 Have you been to Red Bud Isle? Are there any "obscure" spots in Austin that you'd recommend I pay a visit?
Posted by B at 8:25 AM