So this post is extremely belated, but as I explained earlier this week, things have been a bit crazy around here. Anywho, at long last, here's a bit about Ava's first (and now, second) day of school!

Here's the big preschooler as we left the house: 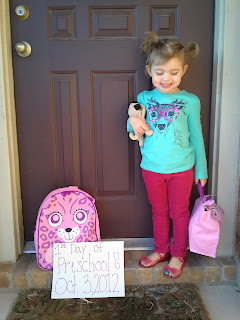 She was so excited. So much so, that she couldn't even look at the camera. Whomp, whomp.

The entire drive there our car was abuzz with excitement. I can neither confirm nor deny that we sang "Call Me Maybe" and "Love You Like a Love Song" at the top of our lungs, but I can say for sure that we had an extremely fun time, high on nervous energy at the enormity of the milestone we were facing. As far back as her first year of life, Ava has had a desire to go to school like the big girls she spends her days with, and there was no denying the excitement she felt at getting to do just that. Even so, she's also still a two-year-old who is realllly attached to her mother, and so that inevitably factored into our morning when we arrived and her lip turned all trembly.

"I don't want to go to schoooooool. School is not fun place!"

Despite the slight hiccup, I knew better than to linger, and got her settled in quickly and left to make things easier on all of us: me, her and her lovely teacher, Ms. Elaine. I know firsthand how awful it is when a parent won't just head out and drags out the whole separation ordeal, and so instead the nice people at Plug & Play let me take up residence in the very front (out of sight, out of mind!) and checked on her for me, ensuring me she was recovered and ready to have a great day!

I will say, and this could potentially be attributed to how I spent my morning, I was surprised at how I felt driving off. On the toughest of mornings, I just knew that when Ava eventually went to preschool I would feel an overwhelming sense of joy and freedom. Instead, and maybe it's because we weren't having a tough morning by any stretch of the imagination, I felt alone for the first time in a long time. Heading out to face the unknown alone, I found myself wishing I had my baby girl beside me.

Thankfully, when I arrived back for pick-up, my baby girl was waiting for me with the type of smile that could make a mother forget the worst of mornings, leaping into my arms! Rather than focusing on how much she missed me, though, and how she had been sad at drop off, Ava instead told me how much fun she had, and when I asked, said, "I can't wait to go back to school!" WOOHOO! That's exactly the attitude I hoped she would have about it, but I'm so glad to know that she enjoyed it as much as I knew she would.

As for her day, it was chalked full of story time (Polar Bear, Polar Bear - who doesn't love Eric Carle?!), music and dancing (her personal favorite - she talked about it all day long!), circle time and art, where they practiced learning colors in Spanish ("azul!" she exclaimed proudly when asked about it) and made a collage of the letter "Q"! 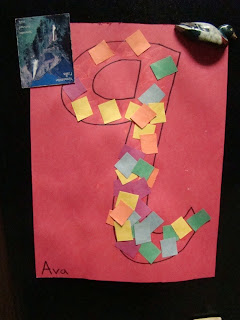 When it came time for her second day of school, she held true to her previous excitement and exclaimed proudly when she woke up, "I can't wait to go to school today!" 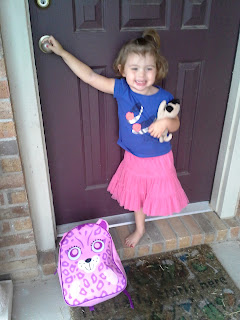 She started to tear up slightly when I took her potty before I left, but she composed herself and didn't cry! Victory!

When I picked her up, she was playing happily with two other children (boys - go figure! she's definitely into the boys!), and was so excited to show me her awesome art project she made (an awesome R in the shape of raccoon - how cool!). 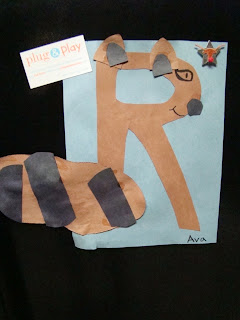 I can't wait to see what she makes this week!

For those following along, I have an appointment with my surgeon this week while Ava is at school, so we'll know more about what we're looking at (taking the mass out or not) then and I'll update :)