What We Stand For.

On this historic day, one with the potential to literally change the world, I had a chat with my daughter about equality, marriage, and, ultimately, love. If you know me in real life, you'll know my SUV is equipped with the Equal Rights sticker. In fact, you don't have to know me in real life to know what I stand for. I am an advocate for equal rights in all forms, and a tried and true friend to the gays. Just ask Oil Cans and Rain, circa 2006 ;)

Yesterday, a mere 24 hours prior to the Supreme Court convening to decide on the constitutionality of California's heinous Prop 8, we were putting groceries into the back of my car when Ava found herself face to face with our bumper sticker. 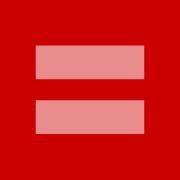 "Mommy, what's that mean?" her curious mind wanted to know.

Now there are times when I am in a hurry. When I'm rushing to get from one place to the next to the next all before school pick-up and it's all I can do to focus on the task at hand. This, though, was not the time to be succinct. Sensing genuine interest from my child, and knowing her love for her many gay uncles, I stopped what I was doing, and explained to her what we stand for at our house, and what I hope she grows to stand for also.

"Well, honey, that's an equal sign. In this case, we have it on our car so that people around us know that we believe that everyone should have equal rights."

Genius child that she is, she followed up with, "What rights mean?"

I had to pause at that question. I clearly understand what rights are, but isn't that what this entire discussion is really all about? Rights, constitutionally, belong to everyone. Rights are unable to be taken away by a change in the law. Rights designate that you have an irrevocable ability to seek certain opportunities. Seeing as how I'm not sufficiently putting the importance of this concept into words, let me borrow a definition from Wikipedia:

"Rights are legal, social, or ethical principles of freedom or entitlement; that is, rights are the fundamental normative rules about what is allowed of people or owed to people, according to some legal system, social convention, or ethical theory.[1] Rights are of essential importance in such disciplines as law and ethics, especially theories of justice and deontology."

Explaining that to a three-year-old isn't the easiest of jobs, so I tried to simplify it by example as much as possible.

"Rights mean that everyone, no matter their age, or the color of their skin, or who they love, is allowed to do the same thing. Right now, we're trying to show people that we think that it is ok for two people, no matter if they are both boys, or both girls, to get married. Do you think Uncle B should be able to get married?"

A most enthusiastic yes.

"Do you care if Uncle B marries a boy or a girl?"

Again, an enthusiastic no.

Well, I rest my case.

I know that the arguments are obviously more complex than all of that, but really, doesn't it boil down to love? Why do YOU care who someone else loves? How does the introduction of same-sex marriage affect you? It doesn't threaten my marriage. It doesn't weaken our vows. If anything, it adds merit to them and places us all on equal ground, creating a community that celebrates love and marriage in any form.

No matter what side of the fence you stand on biblically, if you set your religious beliefs aside, per the separation of church and state, what honest reason can you give for the prohibition of same-sex marriage?