A lot of bloggers I admire are runners. In fact, it definitely seems to be something that is a common theme amongst women I look up to, and so, not wanting to be bested, I decided to take it on myself. I've wanted to for a while, but I've always been a bit...breakable, so I've been discouraged in the past. Lately, though, I've felt a new surge of interest, and so not wanting to limit myself by simply believe I couldn't do something, I decided to give it another go.

Unfortunately, it didn't go so well.

Friday, my first day off, I decided to take full advantage of my newfound schedule (and boy, oh boy, do I love it!), and so after I cleaned up around the house and did a couple of the things I've had on my to-do list the past year or so while I worked crazy hours, I decided to take Ava out for a run. A couple friends of mine recently participated in something called the Joggermom Marathon, where you pledge to run 26.2 miles over the course of a month. I knew starting "small" would be the way to go, and so I decided I would do this myself. Anyhow, I decided since it was the first, I would do my first mile, but our jogging stroller was low on air, so I had to walk, since I was pulling Ava in the wagon. 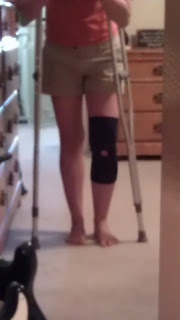 The next day, bound and determined to run, I laced up my running shoes and took off for a couple of miles, walking and running in intervals that suited my out of shape self. Midway through my first mile, I felt a tinge of pain in my knee, and so I went back by my house to wrap my knee before I continued, not wanting to lose my motivation. Unfortunately, the remainder of the walk/run was spent walking, and was increasingly painful, so I headed home.


Initially, the fact that I wasn't running was enough to ease the pain, but after I got out of the shower, going down the stairs was incredibly painful, and while at the grocery store, I was starting to limp pretty badly. What sealed the deal was when I bent down to look at a knee brace (ironically), and I heard a loud pop followed by blinding pain. It was all I could do to get back up, and then I couldn't put any weight on my right leg. Off to the doctor we went.

Turns out, I have a sprained ligament in my knee, as well as a minor tear in my lateral meniscus. How this happened, no one really knows, but my marathon training is on hold while I instead train myself how to use crutches without killing myself or anyone else. Fun times, let me tell you.

Thus ends my twenty-four hour stint as a runner. Hopefully, when I'm healed, I can go back to running!
Posted by B at 8:38 PM