I've mentioned briefly in a previous post that Ava is soon to start preschool, but wanted to talk more about the how and why, and also why I'm so, so excited about this new development.

First off, she'll be starting next week at the co-working site Plug & Play Austin, which has found great success in the feedback they've gotten from parents who've left their kids in the child care room. For more about the Reggio Emilia-based philosophy they follow and more about Plug & Play itself, click here.

Due to the success they've had so far, they've decided to expand the childcare center to also have a flex preschool option, where you can pick any two days a week to send your child to their program, which includes art, music & movement, Spanish, circle time and free play! There are also two different timing options: a morning option (8:30-12), and an afternoon option (2-5:30) Ava will be in the biggest room, where children 2-5 will be, and like I've mentioned before, I love the Montessori-type of age staggering so that Ava will be with older, more advanced children that she can learn from. Ava is definitely motivated by watching other children - in fact, being with older children daily since birth has been a major contributor to her being so advanced in her language and motor skills - so this will be a huge bonus to her attending preschool with slightly older children!

Because of my work schedule and generally chaotic life, we've opted to only put Ava into school one day a week at this time. Mondays we're out the door for ballet shortly after 9, and Tuesday and Thursday we're out the door by 6:45 (!!!), so I don't want to overschedule her by adding a second day of preschool and leaving her no mornings to just veg out in her pajamas and have nowhere to be until the afternoon. Not to mention, we haven't been able to see a lot of our friends from my moms group since starting the new job, so it'll be great to have that unscheduled morning to attend meetups!

I'm so incredibly excited for her to go to school. She had such a fun time the morning that she was there visiting while I worked, and she brought home the most adorable art project that day also - something I'm always jealous of when I see them on mothers of preschooler's walls.
Now I'll have cute school art, too! More than that, though, I think it'll be so good for her. When my husband and I were talking about our budget and the decision to send her to school when she clearly has years to go before Kindergarten and could potentially do preschool for years to come, one thing that he said that really stuck out to me was, "She deserves to go to school." I thought that was so perfectly put, and it immediately made up my mind that we should send her now. Ava is so curious and so interested in learning and being taught right now, and since the school year just started, was just bombarded with back-to-school excitement from the older girls. Even as a one-year-old, I have pictures of Ava holding S's backpack and lunchbox, exploring the classroom and wanting to go to "shool!" Now she gets to! 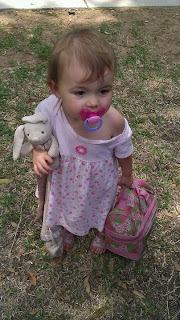 As for me, I don't even know what to do with myself. Well, that's not entirely true. I didn't for about five minutes, but then I decided that - at least initially - I'll stay on site and work on the "plug" side, getting some blogging and freelance writing assignments done without guilt or interruption! Woohoo! I may or may not also have scheduled a massage during her first few weeks - mamas need down time, too!

I can't wait to update with pictures of her first day of school (we've already bought her new outfit and everything!) and share how much she loves it!!
Posted by B at 3:54 PM