This past Wednesday, the rain let up just long enough for us to attend the Children's Day Art Park's Teddy Bear Picnic. We've been frequenting the Wednesday morning concerts and crafts all summer, but when I saw that they'd be hosting a Teddy Bear Picnic as a part of their summer series, I knew that this was the date I was most looking forward to! (Yes, I'm reliving my childhood vicariously through Ava).

Anyhow, I had both girls with me that morning, and so we hopped into the car with our bears and headed downtown for the fest. 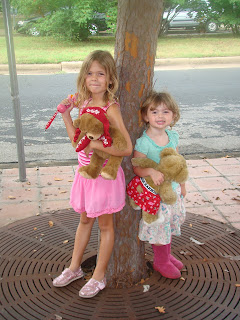 For once we arrived early (an impressive feat, if you know me well!), and had enough time to check out the instrument petting zoo before they were put up for the main performance. Ava absolutely loved having access to all the instruments, and the woman who was standing nearby with the antibacterial solution between children was a lifesaver, because of course Ava wanted to play them all! 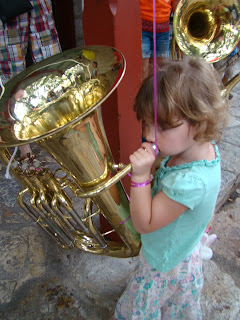 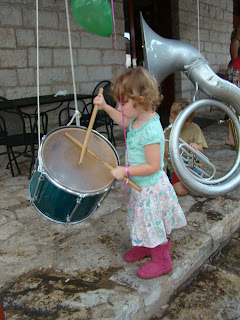 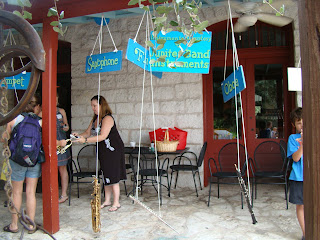 Once we'd had our fill of the instruments - and when I assured Ava that we actually had three guitars, a drum set and a flute in our own house for her to explore - we went to find a seat on the already-packed stone steps. Turns out that everyone with a child in the city was also looking forward to this particular event! 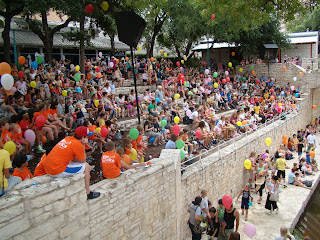 We did manage to snag some seats, though, thanks to a nice mom who took pity on my sweaty self, juggling two kids, both of their balloons, their lemonades, their teddy bears and my overflowing purse. Thanks, lady. You rock. 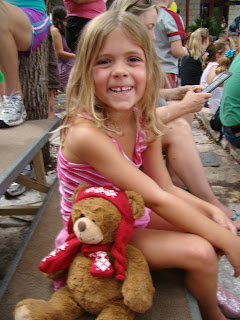 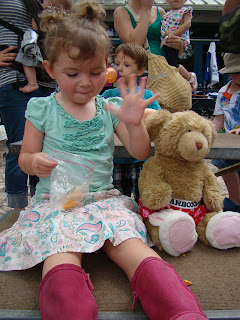 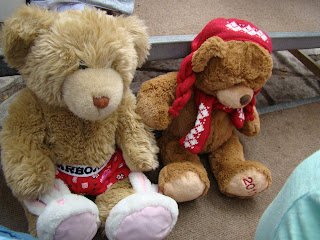 Jon Emory was the performer that particular morning, alongside the Austin Symphony Orchestra's Woodwind Quartet. He's renowned for his Teddy Bear Picnic performances, and entertained us with a few tunes, including a rendition of "The Itsy Bitsy Spider" (which impressed Ava, given she's been singing it ever since!), "Rockabilly Goat" and, of course, a slightly remixed version of what I recognized as the "Teddy Bear Picnic" song. It was pretty cool. 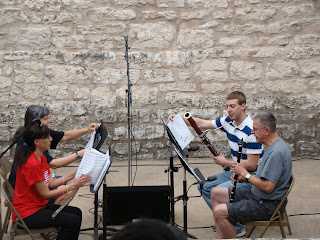 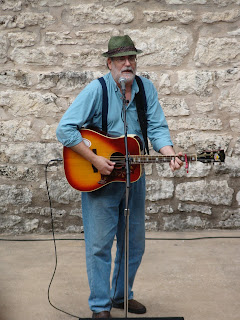 Once the performance was over, the teddy bear contest began, with prizes from the sponsor (Macy's) for the biggest, smallest, silliest, best-dressed, most Austin-y and other bear categories. We had pretty run-of-the-mill brown Build-a-Bears with us and wanted to get in line for face painting before the stickers ran out (these stickers are going to be the death of me, I swear!), so we didn't hang around for that part, instead choosing to bolt to the art tent as fast as six legs of various sizes can possibly go. Hint: it's not fast.

There was lots more fun to be had over at the art tent side of the Picnic, and so we hung around for over an hour getting the girl's faces painted, listening to Carl tell stories, and doing arts and crafts! 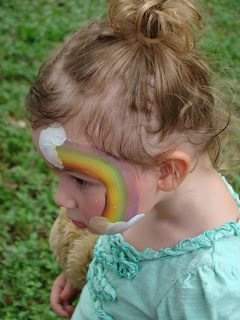 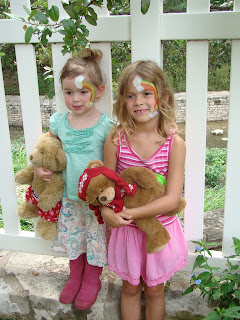 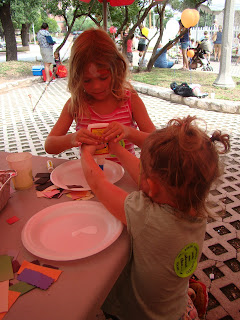 We're already looking forward to the Teddy Bear Picnic next year! And Ava and her little buddy, Teddy, definitely got some bonding time in - she fell asleep with him that same night, and they've been inseparable ever since!
Posted by B at 8:23 AM