A Farewell to Waffle Fries.

There are a lot of things I love about Chick-fil-A. Their lemonade, for starters, hits the spot in a way that is indescribable, and their chicken nuggets are the perfect amount of crisp and tender, not to mention a healthier (relative, of course) alternative to other fast food nuggets. And don't even get me started on the waffle fries. In fact, until recently, Chick-fil-A was a fast food decision I could feel good about (again, relative, folks) when compared with some of the other options, but no longer. For all the things that I love about Chick-fil-A, there is one overwhelmingly negative thing that I despise about them, and that is their political stance on gay marriage. And for that, I can no longer be a customer.

Sure, we all knew that the chain's owner, Dan Cathy, was a religious man - none of the franchises are allowed to operate on Sunday in order to observe the day of rest and allow for employees to be at home with their families. I love families, so despite the fact that I am almost always jonesing for some Chick-fil-A on Sundays, this was alright by me. It made it that much sweeter on Monday.

But now, Mr. Cathy has come out and straightforwardly denounced gay marriage and therefore stands against equal rights for all, and that is something that I cannot overlook.

There are few things I am more concerned with than that Ava grows up to be a conscientious, tolerant, and kind individual - one who knows that her actions and the beliefs that fuel them are significantly more far-reaching than just herself. If there is nothing else I want for her (other than for her to value her education above all else), it is for her to be someone who considers the rights of others and the betterment of our society. I hope that she never is able to remember a time when gay marriage was not legal, but if she does, that she understands that preventing gay marriage is morally wrong, and denying human beings the right to love whomever they choose is not an option, but a fundamental right.

Sure, it seems silly, that an action as small as boycotting Chick-fil-A is supposed to somehow get here from here to there, but my friend Leigh Ann made an immensely valuable point when voicing her own thoughts about Chick-fil-A's anti-gay stance. Even if my business is just a drop in the proverbial bucket, how else can I teach my daughter that our actions, and thoughts, and - eventually - our votes, can make a difference?

So, from here on out, we're not eating Chick-fil-A. And I'll admit, when I announced this to my husband, his response made me proud. He said, "I knew when I heard about this that you were going to say that."

Good. Then I've made my personal stance on this issue - and the lengths (as short as giving up a monthly waffle fry binge or two) that I'll go to in order to have my voice heard - known.

In other news, I've also never been a bigger fan of the Henson's than I am today: 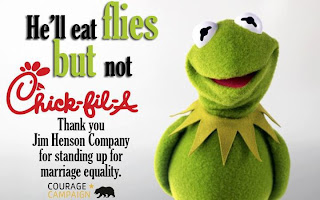 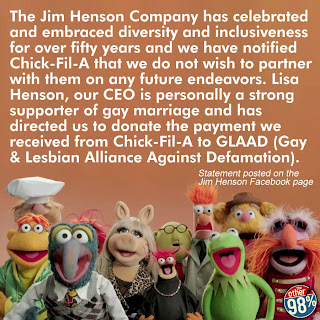