On this day of Thanksgiving, I have more than ever to be thankful for.

Despite my regular posting this week (I'm also thankful for scheduled posts!), I've actually been bedside at Dell Children's Hospital while Ava suffered through a serious illness, one which we still can't put a name to.

Despite having one of the most charming Saturday mornings and afternoons this past weekend, the evening took a turn for the worse, when driving over to a friend's house, Ava started complaining of severe back pain and then started projectile vomiting. This was a huge change from ten minutes prior, when she was running around with my husband, jumping on the bed and being silly. A mere hours before, we'd been decorating a Christmas tree on the side of Highway 360 and re-visiting the 360 Bridge Overlook - this time with daddy. But between 5:30, when her nausea and vomiting began, and 7pm, when we arrived at the Children's Hospital, Ava threw up likely over thirty times. And, for reasons no one seems to understand even now, she became so dehydrated in that short period of time that she actually became unresponsive while in the ER waiting room, unable to hold her head up, recognize us, or tell us her name.


In short, it was the absolute scariest experience of our entire lives. 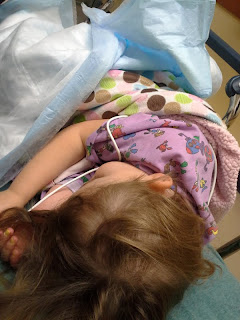 The hospital, thankfully, was a Godsend. A nurse came out and found us and asked A's name, and then rushed us back, sending someone for her folder. Her blood pressure was 141/83 - a shockingly high amount that they said indicated serious pain, and our worst fears were that she had appendicitis or something equally serious that would require surgery. Thankfully, those fears were not proven unwarranted upon examination. They were concerned, however, about a potential UTI gone rogue to her kidneys given the complaint of back pain and obvious signs of pain, and tested her as such. It took us some time to get her to produce a urine sample due to the dehydration - we went through TWO bags of IV fluids before she could even pee (!!!!!!) - and when she did, it tested "dirty", so a kidney infection (acute nephritis) was initially assumed. Despite Zofran (a wonder drug, if you ask me), Ava continued to throw up in between bouts of falling asleep, and sometimes even vomited while asleep without even opening her eyes. Truly terrifying.

The doctor made the decision to admit her, wanting to both observe her and having some serious concerns regarding her mental state, and I happily agreed, unable to get the image of her with eyes glazed over out of my head. Little did I know that our two day hospital stay had only just begun. 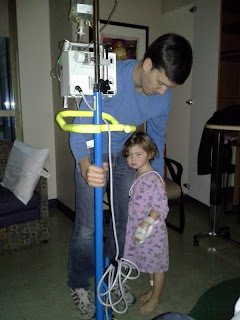 Long story short, we have been through it in the past five days. Her urine culture grew nothing, though a renal (kidney) ultrasound showed a discoloration that indicated inflammation. Strong IV antibiotics did nothing to stop the pain and vomiting except make her feel even sicker and riddling her poor GI tract with some serious diarrhea, posing further dehydration concerns. She went through bags of IV fluids, and some IV Zofran - the one thing that was able to abate the vomiting while in her system. She'd be acting like she felt entirely better, pretending the green line across the floor was a snake and telling us to watch out, and then five seconds later she'd be heaving up the contents of her stomach. Nobody knew why. 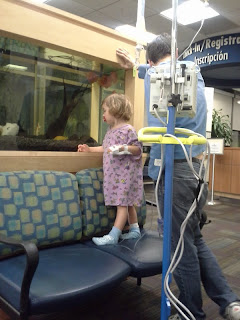 Our second day in the hospital, we did get some clue to the cause when, lo and behold, I started puking my guts up. This led to a diagnosis of acute gastroenteritis, but anyone who has ever been through the stomach flu knows that while AWFUL, what I'm describing clearly is beyond the bounds of your average stomach flu. And no one was able to explain the back pain, other than "body aches". Essentially, we got a diagnosis of stomach flu because putting "I have no clue" isn't exactly an option.

Thankfully, we were released Monday night, and while Ava threw up that night, she has done much better ever since. Today is the first day she's been able to stomach any food without taking the Zofran, and I've finally been able to stop taking the Zofran that an angelic friend rushed over to me Tuesday night after I got sick all over again. By some miracle, my husband has been spared, and has been our rock through this entire thing, even when I haven't been very nice to him from feeling stressed or sick.

So today, and every single day that has come before and will come after, I am so, so very thankful for my family. For Ava, my everything. And for my husband, without whom I could never survive, who is my rock and my friend and my partner.

Happy Thanksgiving, everyone! Kiss and hug your babies, and be thankful everyday for the abundance of blessings that you have - our families are so easy to take for granted, but so impossible to live without.
Posted by B at 9:49 AM