Whew...how have four days gone by since my last post? Geez, time flies.

We've been up to a lot of cool and exciting stuff, and this mama has been pulling some major OT at work! I actually offered to step in for the D's so that they could go to New Orleans for their tenth wedding anniversary, and so I was at work from Friday morning to Saturday late night, hauling 3 little girls to basketball practices, basketball games and birthday parties, as well as trying to get (and keep!) the house clean, bake brownies for Mr. D's birthday Saturday, and generally not lose it after something like 40 straight hours at work. It went well considering how stressful it could've been, but I'm glad it's over. Definitely not feeling like I got much of a weekend, though!

Then, there was this pesky little time change. Normally I'm down with the whole "fall back", taking full advantage of that extra hour of sleep, but Ava didn't get the memo, and woke up early just the same. To top it off, her nap schedule has been all over the place today, with her falling asleep in D's arms before she'd even had breakfast, and then napping again right before we were supposed to head out to run errands. Oh well - A's nap takes precedence over just about anything, since it directly correlates to my sanity!

After she woke up from her second nap, we ran some errands, including hitting up Toys R Us to start on A's Christmas and birthday shopping! Considering the two are days apart, I think we're going to be better off starting our purchasing out early like this in order to spread it out a bit, but we knew that we wanted something extra special for her birthday, and we just couldn't wait to pick it up for her! Check out what we got our little lady for her first birthday: 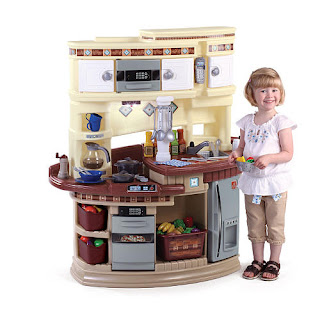 Awesome, right? We got an insane deal on it, between a merchandise credit we had, a $20 off sale and a 20% off coupon that came on our mailer! We're planning to do this for her birthday, and then the rest of the things going for Christmas/stocking stuffers/Santa :) I'm so excited!!!!

In less exciting news, A had a reaction to the yogurt we tried with her, which makes me super sad. I've been easing dairy back in - sometimes successfully, less successfully with other forms - and it's gone well enough that the doc suggested that we could try yogurt with her, as the milk protein is the most broken down in yogurt. We tried it, in a very small amount of YoBaby! Yogurt Blends, and the poor doll had diarrhea for over 24 hours. As such, no dairy for her - or I again!! - until after 1 year. Anyone have any good vegan frosting recipes to pass my way to accompany her vegan chocolate birthday cake?!

A's still on her antibiotics, and let me pass a little tip along to those of you who may also have a baby who isn't down with the refrigerated antibiotics. A is a champ medicine taker when it comes to Motrin, etc, but anything the doc prescribes, she fights like hell. So...at my wits end, I've started taking it out of the fridge an hour before she needs to take it in the dropper, and letting it settle to room temp. Voila! She takes it just fine!

Alright, that's enough update for now - time to go cuddle my little baby bear! Hope you all had a great weekend!
Posted by B at 6:06 PM