By now, chances are you've seen the new Time Magazine cover featuring a mother breastfeeding her three-year-old son. It certainly seems to be making waves quickly, and leaving more than a usual amount of people in an uproar. I definitely am offended by this cover, but not for the reason you would think. 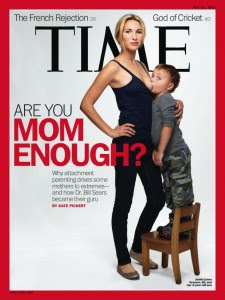 As you all know, I breastfed Ava until last month, when she was 27 months old. She's 37" tall. Chances are, she wouldn't even need the chair the little boy is standing on to nurse from his mother. So, rest assured, I'm not narrow-minded enough to be offended by the image. What I AM offended by, however, is Time Magazine's blatant use of an innocent image to stir up controversy amongst readers in order to promote an article that has significantly less to do with extended breastfeeding than the cover leads you to believe.

To make matters worse, the caption accompanying the photo, asking, "Are you mom enough?" is additionally offensive to me. When your sole purpose is to examine attachment parenting and - at least based upon the little bit of the article you can read without being a subscriber until the print version hits newsstands on May 21 - paint it in a negative light based on extremist views, the last thing you should do is attempt to pit mothers against one another based on their parenting philosophies (and based upon their feelings on breastfeeding, whether extended or not).

Shame on you, Time Magazine. You present what appears to be (again, based on what little you can read of the article at this point in time) a narrow idea about attachment parenting, with a focus on the most extreme tenants and observers of the philosophy. I would comfortably say that I most closely follow along with attachment parenting (we extended breastfed, Ava co-slept/sleeps, and we use gentle methods of guidance to discipline), but do I feel it takes away from my ability to be a woman? Or to be someone outside of a mother? Absolutely not. There are plenty of people who subscribe to an attachment parenting school of thought that do so moderately, and presenting the argument that it is potentially bad for the family is small-minded and potentially harmful.

What do YOU think about the Time Magazine breastfeeding cover? The image? The article? Do you agree about the way the information is presented?
Posted by B at 2:02 PM