Man, Ava had a hard day. And while we're being honest, mommy did too!

Today was our appointment with the allergist to look further in to what is causing A's reactions to certain foods. She's been displaying classic milk allergy/milk protein sensitivity signs since birth (though I wasn't able to figure out what exactly was going on until she was a few months old), but reacted to eggs a few weeks back when I gave her scrambled eggs for the first time, so at that point I knew I needed a couple of things. For one, having a baby who is unable to consume both dairy products (including milk, cheese, butter, whey, casein, etc.) and egg poses some issues with regards to what she CAN eat, and with her expanding appetite and desire to eat any and everything D and I are eating, I knew I'd need help to manage her dietary restraints and still ensure she was getting sufficient nutrition and calories for her needs. I also wanted to have her tested for allergens that tend to be more severe and can potentially be life-threatening, including peanuts and tree nuts, so that if God forbid she had an allergy to them and it was severe, we'd be armed with an epi-pen and the information we'd need to be prepared. I've been in situations before as a nanny where a child was over and was so severely allergic to nuts, their presence in the pantry near a snack he consumed was enough to send him to the hospital...SCARY.

Anyhow, the visit went pretty great, I must say. The doctor was amazing (seriously, if you're in the Austin area and need a rec. for an allergist, email me! I'd 100% recommend our doc for children AND adults!), and was really thorough and listened to all my concerns and questions without making me feel like an overzealous parent. Thanks, doc. They did a standard 8 panel food allergy test, which tested for the most common food allergens, including milk, eggs, wheat, soy, peanuts, corn and two controls to ensure the tests were working.
{Such a brave little girl!} 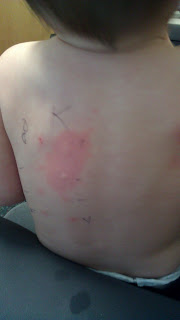 The good news? First, I am super proud of my brave little munchkin, who - despite looking extremely annoyed - didn't even cry! She did, however, continuously look at the nurse over her shoulder until she left the room, though, as if to say, "I don't trust you for a second, lady!" The best news? Ava tested for negative on everything except for corn, and he said that corn has an extremely high rate of false positives. SHE TESTED NEGATIVE!!!!!!!!!!!!!!

So what does that mean for us going forward, and for her current issues? A couple of things. First off, chances are instead of a true allergy, which would likely be lifelong, she has digestive sensitive to the proteins in milk and egg whites. Okey dokey, no problem. I avoid them while nursing, she avoids them until we revisit this per the doctor's suggested timeline, and the odds are skyrocketing that she'll outgrow them as her stomach matures. THANKYOUTHANKYOUTHANKYOU!!

The bad news?
-There is a high rate of false negatives, so we're not entirely in the clear until the blood test results that accompany the skin test comes back.
-She had to have a blood draw. OMG. She's had one once before, and let me tell you, there is NOTHING wrong with homegirl's memory. She knew immediately where we were (even though it was a different CPL location) and what was about to happen, and started to let out the most blood curdling screams. Seriously, it was heartbreaking. She was screaming and hyperventilating, trying to wrestle her way out of my arms, all the while turning beat red, sweating and, sadly, vomiting. She was hysterical, and mommy had tears falling fast down her cheeks as well. It was pitiful. Poor darling. She came home and zonked right out:

Thankfully, it's over, and as long as the bloodwork looks OK, fingers are crossed that we just got some answers and that they're great news :)