Hello, friends. You still reading?! Sorry I've been absent, but we've been SO busy this weekend. Doing what, you ask? Let me fill you in.

Despite our house being a mere three years old and purchased new, there are some repairs/renovations we're wanting to do in the upcoming year or two. First and foremost, we don't have ceiling fans. Don't ask me how I failed to notice this, because frankly I'm not entirely sure, but seriously - what kind of builder doesn't add ceiling fans? We have marble bathrooms, and no fans? I digress. Anyhow, this weekend started our first ceiling fan installation project. I'll let you know when it's finished - haha. We're also wanting to plant 10 or so bushes along the back fence since it's wrought iron to give ourselves some privacy, and to stop the neighborhood kids from messing with our dog. I'm a kid lover and all that jazz, but the neighborhood kids leave a little something to be desired.

I'm also starting some new painting projects, including a serving tray to match the downstairs remote caddy I recently finished, and a garbage pail for Ava's room that isn't totally ugly, plain and stinky!

What else? I got my highlights touched up, for one thing. My hair has been looking...well, pretty terrible. I hadn't had it done since right before Ava was born, so we're talking about four months of growth on my highlights. Not a nice look for anyone. D was awesome and brought Ava by the salon so she could meet the nice folks at Avant - I've been getting my hair done there for almost EIGHT years. Whoa - they've got to witness me growing up, and so naturally they all wanted to meet our little bundle. She LOVED it in there - apparently she had a sixth sense alerting her to how much fun can be had at the salon in her future, since she was all smiles.

I've also done a little shopping, since my wardrobe could use a bit of updating. I'm pretty sure the only clothing I've bought since before this time last year has been for Ava. Holy moly.

We've also managed to squeeze in a trip to Lowe's, an oil change, weekly grocery shopping, and my favorite - a trip to Build-A-Bear to make Ava's Christening bear. She turned out great! I've been trying to get her baptism on the books now for weeks and months, but due to our Reverend's retirement, and then surgery, and then rehab, it's been continuously pushed back. Now it's looking like we're going to get to move forward with it, so I've been planning the details, guest list, place, time, etc, and making sure my Christening gown from 25 years ago (!!!) will fit, since my Christening was at 6 weeks, not 4 months! Here's a sneak peek: 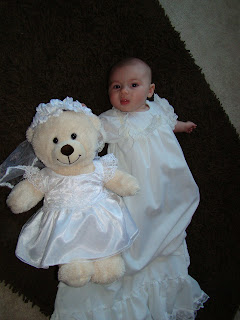 She more or less picked the bear herself. There was one I had my eye on going in to the store, but she just kept staring at this one, and who am I to say no to this face:

Here's another couple pictures for your troubles: 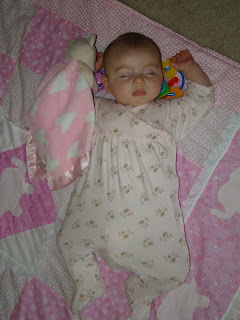 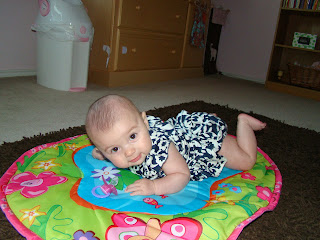