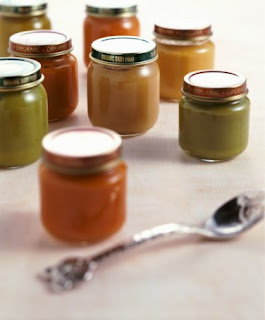 Now that all of our babies are either at or nearing four months, I thought I'd ask my fellow mommies opinions on cereal. When are you planning to start your little sweetie on solids? Are you starting with cereal, or just going to mashed up solids? Are you going with store-bought or homemade?

I'm reallllllllly leaning towards putting off solids until six months. I love breastfeeding, and Ava has no complaints either, particularly now that I've given up dairy, so I don't see why I can't continue to exclusively breastfeed until she's at least six months.

Here are some of the benefits, and the argument for postponing solids until at least six months of age, per Kelly Mom, an absolutely terrific source of information for the breastfeeding mother:

Delaying solids gives baby greater protection from illness.
Although babies continue to receive many immunities from breastmilk for as long as they nurse, the greatest immunity occurs while a baby is exclusively breastfed. Breastmilk contains 50+ known immune factors, and probably many more that are still unknown. One study has shown that babies who were exclusively breastfed for 4+ months had 40% fewer ear infections than breastfed babies whose diets were supplemented with other foods. The probability of respiratory illness occurring at any time during childhood is significantly reduced if the child is fed exclusively breast milk for at least 15 weeks and no solid foods are introduced during this time. Many other studies have also linked the degree of exclusivity of breastfeeding to enhanced health benefits.

Delaying solids gives baby's digestive system time to mature.
If solids are started before a baby's system is ready to handle them, they are poorly digested and may cause unpleasant reactions (digestive upset, gas, constipation, etc.). Protein digestion is incomplete in infancy. Gastric acid and pepsin are secreted at birth and increase toward adult values over the following 3 to 4 months. The pancreatic enzyme amylase does not reach adequate levels for digestion of starches until around 6 months, and carbohydrate enzymes such as maltase, isomaltase, and sucrase do not reach adult levels until around 7 months. Young infants also have low levels of lipase and bile salts, so fat digestion does not reach adult levels until 6-9 months.

Delaying solids decreases the risk of food allergies.
It is well documented that prolonged exclusive breastfeeding results in a lower incidence of food allergies. From birth until somewhere between four and six months of age, babies possess what is often referred to as an "open gut." This means that the spaces between the cells of the small intestines will readily allow intact macromolecules, including whole proteins and pathogens, to pass directly into the bloodstream. This is great for your breastfed baby as it allows beneficial antibodies in breastmilk to pass more directly into baby's bloodstream, but it also means that large proteins from other foods (which may predispose baby to allergies) and disease-causing pathogens can pass right through, too. During baby's first 4-6 months, while the gut is still "open," antibodies from breastmilk coat baby's digestive tract and provide passive immunity, reducing the likelihood of illness and allergic reactions before gut closure occurs. Baby starts producing these antibodies on his own at around 6 months, and gut closure should have occurred by this time also.

Delaying solids helps to protect baby from iron-deficiency anemia.
The introduction of iron supplements and iron-fortified foods, particularly during the first six months, reduces the efficiency of baby's iron absorption. Healthy, full-term infants who are breastfed exclusively for periods of 6-9 months have been shown to maintain normal hemoglobin values and normal iron stores. In one study, the researchers concluded that babies who were exclusively breastfed for 7 months (and were not give iron supplements or iron-fortified cereals) had significantly higher hemoglobin levels at one year than breastfed babies who received solid foods earlier than seven months. The researchers found no cases of anemia within the first year in babies breastfed exclusively for seven months and concluded that breastfeeding exclusively for seven months reduces the risk of anemia.

Delaying solids helps to protect baby from future obesity.
The early introduction of solids is associated with increased body fat and weight in childhood.

Delaying solids helps mom to maintain her milk supply.
Studies have shown that for a young baby solids replace milk in a baby's diet - they do not add to baby's total intake. The more solids that baby eats, the less milk he takes from mom, and less milk taken from mom means less milk production. Babies who eat lots of solids or who start solids early tend to wean prematurely.

Delaying solids helps to space babies.
Breastfeeding is most effective in preventing pregnancy when your baby is exclusively breastfed and all of his nutritional and sucking needs are satisfied at the breast.

Delaying solids makes starting solids easier.
Babies who start solids later can feed themselves and are not as likely to have allergic reactions to foods.

All of these seem like valid arguments to me, not to mention that continuing to exclusively breastfeed is:

*free
*convenient (no cereal to mix, meals to be home for, etc)
*a great way to use up extra calories!

As far as the baby food goes, I think I've mentioned before that I intend to make Ava's baby food at home...anyone else planning to do this? Anyone with experience with this that can suggest some helpful resources?
Posted by B at 10:14 PM