Oh my goodness, Ava is EIGHT months old today! She's grown by leaps and bounds this month, and is doing so much more than I ever expected she would at this age. Here's a bit of what she's up to: 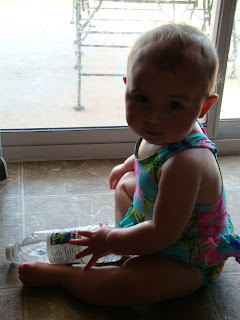 -Ava weighs 19lbs even, and is over 28" long! Holy moly!!! Somehow, though, she's able to wear her 3-6 month onesies still, so perhaps she is short-torsoed and long-legged, since she needs the 12-month length pants! She's even wearing 12M PJ's! 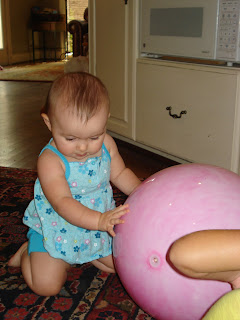 -Ava eats (and eats and eats) so well! She's tried cauliflower, broccoli, tangerine, plums and blueberries this month (the last two may not have been this month), as well as jars of Earth's Best chicken, turkey and lentil mixtures (I cannot bring myself to puree meat either, A.Lee!!!) that we were given with some baby clothing a friend had outgrown. She's also started on a few table foods, eating cheerios, apple strawberry gerber puffs (which are too sticky once they mix with saliva/hands, so not quite a hit yet), banana and avocado chunks. She hasn't quite figured out the whole feeding herself thing, at least not since they stick to her hands like crazy, but she loves the textures if you give her a little help! 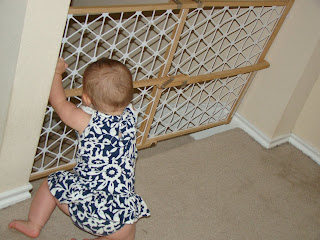 -She learned how to drink from a straw, how to wave bye-bye and how to clap this month, and also says "mama" and "baba" with consistency now. "Mama" she likes to reserve for when she's fussing and wants me, "baba" is constant, and sometimes almost seems directed at her binky, which we sometimes call "baba". D is a bit hurt that she hasn't decided to say "dada" yet, but it's only a matter of time now... 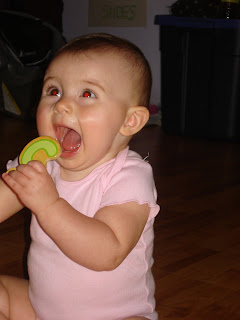 -A can crawl SO fast. I'm talking super lightning speed from one side of the room to the other, tummy well off the ground. Yikes! This has made for a big month of babyproofing, including new baby gates, corner and edge guards for the coffee table, outlet plugs, and - if we can get our act together - cabinet latches soon. We've also purchased a flat screen TV lock, but I need D to install it (I do everything around here EXCEPT hardward installation - sorry buddy, but you're it!), so hopefully he'll do that this weekend! 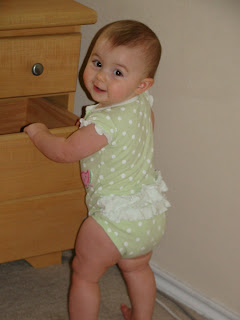 -A pulls to standing on EVERYTHING, including now the wall. Yep, somehow she can get her balance well enough with her hands flat against the wall to pull to standing. The other day she actually let go and stood for about 5-10 seconds before falling. Mommy nearly had a heart attack. I give it 4-6 weeks before she's walking....holy crap! 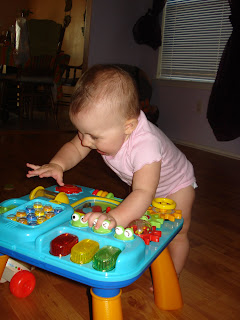 -In honor of her eight-month birthday, A finally grew enough hair to put a bow in it! What. Up. 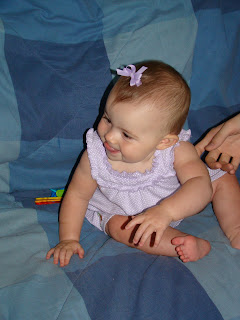