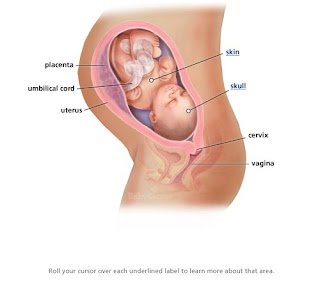 How your baby's growing:
This week your baby weighs a little over 4 pounds (heft a pineapple) and has passed the 17-inch mark. He's rapidly losing that wrinkled, alien look and his skeleton is hardening. The bones in his skull aren't fused together, which allows them to move and slightly overlap, thus making it easier for him to fit through the birth canal. (The pressure on the head during birth is so intense that many babies are born with a conehead-like appearance.) These bones don't entirely fuse until early adulthood, so they can grow as his brain and other tissue expands during infancy and childhood.


How your life's changing:
As your baby fills out even more of your belly, lots of things might start to change: Whereas before you were sashaying, you may find yourself waddling. Finding an easy position to sit in — let alone sleep — is becoming more of a challenge. And bumping into chairs and counters is par for the course.

You may be feeling some achiness and even numbness in your fingers, wrists, and hands. Like many other tissues in your body, those in your wrist can retain fluid, which can increase pressure in the carpal tunnel, a bony canal in your wrist. Nerves that run through this "tunnel" may end up pinched, creating numbness; tingling, shooting or burning pain; or a dull ache. Try wearing a splint to stabilize your wrist or propping your arm up with a pillow when you sleep. If your work requires repetitive hand movements (at a keyboard or on an assembly line, for instance), remember to stretch your hands when you take breaks — which should be frequently.
Posted by B at 7:49 AM