A couple weeks back, I received an email from one of D's coworkers asking if I'd be okay with them throwing us a diaper shower & happy hour at Trudy's, one of my absolute favorite restaurants! Would I be okay with it? HECK YEAH!

It was set up to be a surprise for D, since she knew that being the type of person he is that he wouldn't want anyone to go out of their way or do anything special for him, but she figured if she got me in on it that he'd be happy with it in the end. Boy was she right! There were so many times that the surprise could've been ruined, but in the end, even having ran into a coworker while parking the car, we managed to pull it off and he was completely and totally in the dark :) I'm pretty proud of myself for not having spilled the beans...there were a few times where I almost told him out of either sheer excitement, or fear that he might be mad...the only surprise I've ever had a hand in since we've been together was the baby (which, for the record, was a huge surprise to both of us!) :)

Anyhow, the shower was amazing! Having heard in passing about our previous shower and knowing that we were pretty stocked full of baby gear, everyone brought packs of diapers - almost 900 total in sizes ranging from NB-4. We now have over 1300 diapers waiting for Baby B's arrival...while I'm sure we'll have to buy some packs here and there, I think it's a safe bet we're pretty set for the time being! We have the most size 1 & 2, which is great, and I cannot even imagine the Pampers Gifts to Grow points we've accumulated now!

Also, D's coworkers are fantastic! I've met them a handful of times, and know some better than others, but they were so wonderful and generous and interested, and I think that their support is really important to D. I know that having the D's on my side has been extremely helpful, so I'm so very grateful to them for having done this for us and being so supportive - they're truly amazing and I am so very, very blessed and thankful!

Here are some pics, including the most badass Longhorn diaper wreath EVER (made by some of his office-mates), and evidence suggesting Baby B is the most spoiled child ever...oops. 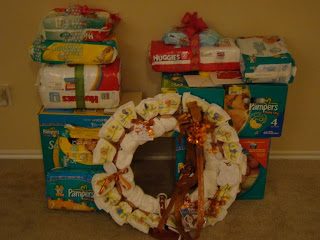 And an up-close shot of the magnificent diaper wreath: 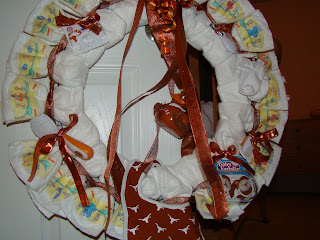 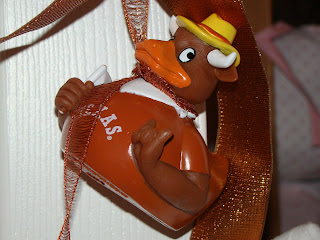 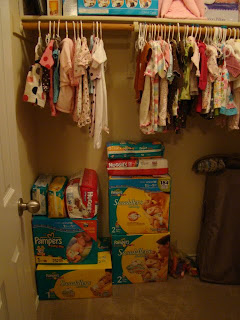