11 weeks! I'm getting closer and closer to that lovely, deep-breath-inducing second trimester. Already, I am feeling better and better, at least fatigue-wise. The past 3 days I haven't been able to nap, and though I'm normally passed out on the couch by 10PM on those days, it's a feat in and of itself that I'm not passed out by noon! 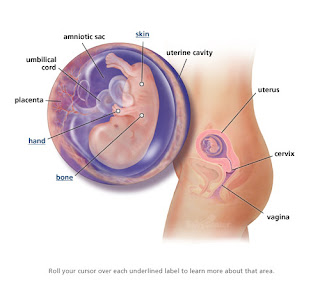 About baby's development this week:

Your baby, just over 1 1/2 inches long and about the size of a fig, is now almost fully formed. Her hands will soon open and close into fists, tiny tooth buds are beginning to appear under her gums, and some of her bones are beginning to harden.

She's already busy kicking and stretching, and her tiny movements are so effortless they look like water ballet. These movements will become more frequent as her body grows and becomes more developed and functional. You won't feel your baby's acrobatics for another month or two — nor will you notice the hiccuping that may be happening now that her diaphragm is forming.