Lord, thank you for getting me to 12 weeks! I have been WAITING for this day since the second I found out. I know I still have a little bit of time before things are really and truly in the clear, and even then, nothing is certain, but 12 wks is a good place to be!

First things first, about this morning's appointment:
*No ultrasound (WHAT A DISAPPOINTMENT!), but heard the heartbeat and he/she's going strong at 167...even higher than last time! They said it sounds great!
*I weighed in 1lb, 4oz less than at my last appointment...suh-weeeeeeeeet! And that's with a.) having been on vacation last week, and b.) having gone to a buffet for dinner last night. A buffet, people. What's happening to me? I can admit, though, it was the best food I've ever eaten in my entire life.
*Dr. R (my new best friend and personal hero) said that a.) he expects me to gain ~30lbs since i'm 'this big' *gesturing to his pinky finger* (his words that eternally made him my new favorite person!), and most importantly, HE THINKS HE CAN INDUCE ME AROUND 12/28. HECK YEAH!!!!!!!!!!!!!!

Next appointment: 7/20 :) No ultrasound then, either. Which means, sadly, no finding out the sex until 20 weeks, unless the MFM Specialist I'm going to see Weds will see me again before then to do it, since I'll probably start seeing him monthly or every other month in the near future. This will be determined at my appointment Weds. 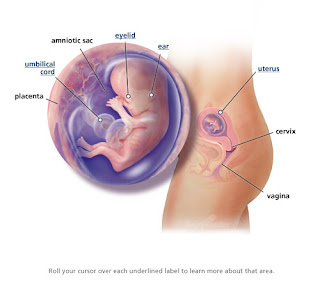 How baby's developing:
The most dramatic development this week: reflexes. Your baby's fingers will soon begin to open and close, his toes will curl, his eye muscles will clench, and his mouth will make sucking movements. In fact, if you prod your abdomen, your baby will squirm in response, although you won't be able to feel it. His intestines, which have grown so fast that they protrude into the umbilical cord, will start to move into his abdominal cavity about now, and his kidneys will begin excreting urine into his bladder.

Meanwhile, nerve cells are multiplying rapidly, and in your baby's brain, synapses are forming furiously. His face looks unquestionably human: His eyes have moved from the sides to the front of his head, and his ears are right where they should be. From crown to rump, your baby-to-be is just over 2 inches long (about the size of a lime) and weighs half an ounce.
Posted by B at 12:30 PM